Boson Protocol has been designed with composability in mind. Beyond the mandatory on-chain modules that cover the main logic, there are some that are used optionally or can be customized. The multi-layered protocol as a whole acts as a Web3 building block on its own and could well be taken as a black box that facilitates off-chain exchanges, though if one wants, the black box could be inspected in detail as the protocol is entirely open.

The key part of the protocol is the core exchange mechanism subsystem that handles the exchange of the on-chain value for the off-chain value between two parties. The protocol provides other features through a set of functional and optional protocol modules.

The below diagram represents the modular and composable nature of Boson Protocol v2's tooling and applications. These components are a set of reusable libraries and visual elements/components that provide developers and integrators with the tools to create high quality and easily maintainable applications with Boson Protocol.

Describing the stack bottom-up, it is worth observing that Boson Protocol aims to be a composable block in the wider Web3 space. It has many parts that are customizable, but some essential modules in the Core Protocol Layer are enforced and configurable only by the governing DAO. 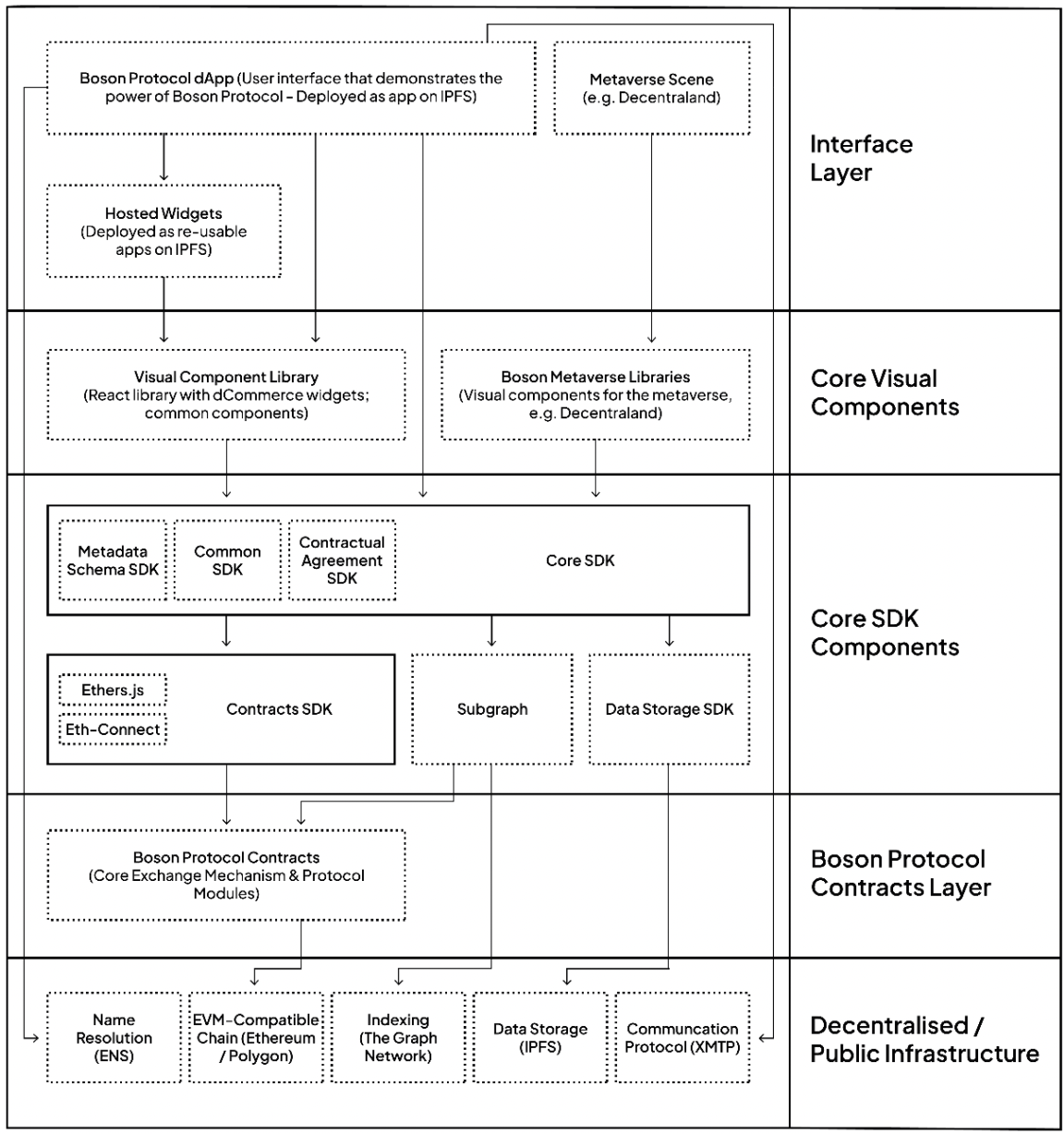 The core protocol can run on any EVM-compatible blockchain e.g. Ethereum, Polygon, Gnosis Chain etc. The protocol is designed so that it can be used with meta-transactions, enabling users to sign transactions in a standardized way, which can then be relayed to the target chain by another party.

As a data storage layer the IPFS network can be used for storing images and large bodies of text in a decentralized and immutable manner, requiring only a minimum storage capacity to be kept on-chain.

Another piece of decentralized infrastructure leveraged is XMTP. XMTP protocol enables secure exchange of messages between Ethereum addresses, this is leveraged to enable Buyer and Seller communication as well as to enable dispute resolution in a private and decentralized manner.

You can interact with Boson Protocol at different levels of the stack, from a no-code approach where you simply use the Boson dApp to create your own storefront, through deeper integrations using our Core Components, or you can interact with the deployed contracts directly.

See the Tutorials and Technical Documentation sections of this site for more information and developer instructions.